(HiltonHeadRealtySales.com is a division of Southern Lifestyle Properties.)

Things That Kill Your Credit

Some people take their credit for granted and don’t start paying attention to it until they need it. The problem with this is that it could delay if not altogether cause the loan to be denied.

The most common issue is not correcting items on your credit report. A large majority of credit reports have errors but not all of them are critical. Since it takes time to remove them, it is a good practice to review your free credit reports from each Experian, TransUnion and Equifax once a year at www.AnnualCreditReport.com.

Another problem is making late payments. One 30-day late payment could be enough to cause a borrower to pay a higher interest rate or even be denied a loan. Payments have a due date and even when they allow a few days before a late fee kicks in, if it isn’t on-time, it is late.

View More
Posted in General Interest
no comments yet

An unexpected, larger-than-normal water bill could lead a person to think that they might have a leak. Before incurring the cost of a plumber, it is fairly easy to run your own test. Locate your water meter. They’re usually in the front of the house, near the street. In some cases, you might need a meter key to open it; they can be purchased at Lowe’s, Home Depot or other hardware stores.

Step One - Write down the numbers on the meters to get a current reading. Don’t use any water for thirty minutes. If the meter shows water usage during the test period, proceed to step two.

Get Ready for College One of the important things as a parent is to plan for their children’s education. Let’s look at two different approaches: a savings account or investing in rental real estate.

View More
Posted in Real Estate Investing
no comments yet

There were $466 billion in new mortgage originations in the second quarter. Two new charts introduced in this quarter’s report show that just under half of the Q2 strength in originations were driven by borrowers with credit scores over 780. By contrast, only 8 percent ($38 billion) of all new mortgages were originated by borrowers with credit scores below 660.

There is a frequently quoted expression “more money has been lost from indecision than was ever lost from making a bad decision.” Regardless of the extent of its accuracy, most people can recall when procrastination has cost them money. There are markets so short of inventory that buyers have become frustrated after losing bids for several homes and have decided to wait until more homes come on the market. In the meantime, the shortage of homes is driving the prices up more by the month.

There are buyers who can’t find what they want for the price they want to pay and think that waiting will somehow change things. In some cases, what they want just keeps moving farther and farther away from them.

View More
Posted in Real Estate Investing
no comments yet

Who is Your Champion? The Super Bowl and World Series determine the football and baseball champions. Since there can only be one champion, the other team loses the competition. In feudal times, a knight might champion for the king or a patriotic, romantic or religious cause.

Fierce competition can occur when buying or selling a home because each party wants to get the “best deal” possible. When the buyer and seller are not equally matched, and they rarely are, it is important to have a champion on your side to fight for your cause.

It's Hard to Imagine

With mortgage rates below 5% since 2009, you’d think any homeowner who should refinance would have already. However, it is estimated, there are approximately 6.5 million borrowers who would benefit with significant monthly savings by refinancing. Rodney Anderson of Supreme Lending, on his weekly radio program, described a recent pipeline meeting where they reviewed every pending mortgage application his company was processing. They had seven refinancing applicants whose current mortgage was over 9% and twelve with a rate between 7% and 9%.

“Some 550,000 American homeowners with a mortgage could save $500 or more each month by refinancing at today’s rates. Over three million could save at least $200 per month.” said Ben Graboske, CTO with Black Knight Financial Services.

While the pace of home-buying activities picks up around the nation, certain areas are seeing more excitement than others.

As is usually the case during economic recoveries, no two cities recover in exactly the same way. Some have a glut of inventory that will take many years to turn over, and other markets such as New York City, Denver and San Francisco have barely any inventory left at all, and each new listing seems to spark a vicious bidding war that drives the price far beyond a property’s appraised value.

Seattle falls in the latter category.

DeBord, who is also the state director of Seattle King County REALTORS®, says that institutional investors often bid the most aggressively and get the higher-priced deals; however, it’s the so-called “regular” buyer—the one who will actually move into and live in the property for at least a few years—who comprises each side of a typical Seattle bidding war.

May Home Prices Up 1.2 Percent

In a sign that the U.S. housing market is on track for a strong spring/summer buying season, home prices continue to show solid gains in May, according to the latest FNC Residential Price Index™ (RPI). Prices across the country climbed 1.2 percent following an upwardly-revised April, which saw the largest March-to-April seasonal gain since 2005.

With homes selling at rapid pace, supply in many local markets remains relatively challenged amid rising sales. "While the participation of first-time home buyers has reportedly reached record highs, rising demand from potential trade-up buyers has also contributed importantly to the price growth in many markets,” says Bob Dorsey, FNC's chief data and analytics officer. "Trade-up buyers continue to capture moderate to modest gains on their investment; in May 2015, realized home price appreciation, measured at an annualized rate, averages 2.6 percent across the country."

Foreclosure sales have dropped to their lowest levels since October 2007. In May 2015, completed final sales of foreclosed and REO properties comprised about 10.3 percent of total existing home sales, a decline of nearly two percentage points from April's 12.2 percent. 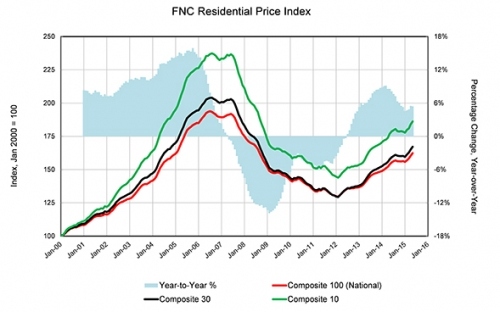 Average time-on-market drops rapidly, down to 85 days in June, compared to 96 days in May. Meanwhile, sellers are taking smaller cuts off their asking price, averaging 3.1 percent in May, compared to April's 3.6 percent. Preliminary June estimates show a continued drop in the asking price discount nationwide, with buyers in the San Francisco market bidding up prices to pay an average of 4.8 percent above the listing price.

If there was a magic formula for selling real estate quickly and easily, you can bet every real estate agent would be signing up. Real estate sales affect agents, buyers and sellers one way or another. Although homes need to be in good condition and offer what buyers are currently seeking, ultimately the real estate agent drives the sales. To stay on top of their game and work a little magic, smart agents have learned that a home warranty, also called a home protection plan, can work miracles for increasing sales and quick turnarounds. Learn how agents, sellers and buyers benefit from home warranties and all come out winners.

Home Warranties
Home warranty programs are available for purchase by consumers who want protection for home appliances and major home systems in the event they fail or break down. If any of the items under warranty in the program should fail, the consumer simply contacts the home warranty company and they see to it that the item is inspected, repaired or replaced by a qualified contractor.

Agents Start the Process
Once a real estate agent learns about the advantages of home warranty programs, work takes on new meaning and they see the possibilities for success. Skeptical buyers are no longer afraid to consider older homes when sellers pay for a home warranty. After an agent explains that the warranty covers appliances and major heating, electrical and cooling systems, clients become eager to see a home that was once not considered. The agent just got a shot at another sale!